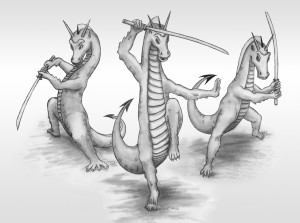 As I have previously mentioned Prince Luan was the product of a wealthy family that carelessly indulged his every whim and desire when he was a young boy.  They produced a spoiled self-absorbed young man who had no patience and was quick to throw flaring temper tantrums. To safe guard the innocent that Luan might harm I introduce in this post the last type of characters in my story – the Warrior Dragons.

Luan’s behavior may be commonplace in what we call the civilized part of the world where parents in their misdirection look to wealth and power as the major goals in their life instead of incorporating love and discipline into their family structure.  The people of the Princess’ the kingdom were completely surprised by Luan’s behavior, in fact they were stunned.  Before he made his second visit the Emperor and the High Council turned to the Dragon Council for help since they expected another confrontation from Luan.

You may remember from earlier posts that the dragons of this land took care of the people giving them wise advise and counsel but since they were gentle peace-loving creatures they were no match for heavily armed soldiers.  Fortunately the earliest dragon councils knew of the evil tendencies that humans can exhibit and provided for the possibility of cruelty by creating a group of dragons that could protect the weak.

These Warrior Dragons were trained in the martial arts and carried simple but deadly weapons.  They didn’t belong to any of the regional dragon communities but traveled in groups of three throughout the different areas of this country much like rangers.  At the sign of danger they positioned themselves in a triad attack formation ready to go into action.  Then when they attacked they moved with such blinding speed and violence they created an assault that was so ferocious that no one ever survived. 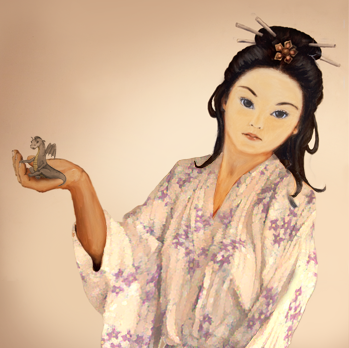 As I began to write this story I realized that I needed to mold my characters so that their strengths and weakness could play off of each other.  The Littlest Dragon was made so small so that he would look insignificant and inept at handling difficulties of life but it is because he is so small that this apparent weakness becomes his strength.  His small size would also create a coziness that would appeal to the readers, especially young girls.

I wanted to keep the story in line with the Chinese legend that Leizu discovered silk but besides changing her history from being the wife of the Yellow emperor to the daughter of the emperor, with whom young readers can identify, I wanted her to come from a very poor kingdom.  It is because of this poverty that the Princess is faced with a crisis in the middle of the story that she must overcome.

The underlying message of this story is that you don’t have to have magical abilities, super human talents or extreme wealth to be successful.  Anyone can become successful and achieve their dreams.  A goal, persistence and action are some of the most important keys to achieve success.

Princess Leizu had a humble childhood.  Her mornings were spent with her aunt who ran the royal weaving mill that had previously been managed by her husband who is now deceased.  Afternoons were spent studying in the garden where she was tutored by this aunt.  These morning and afternoon experiences shaped her character; she is hardworking, diligent and humble. 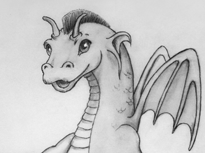 Growing up in the second half of the Twenth Century I was lucky to spend some of the spare time watching animated works from the golden age of cartoons.  Walt Disney Studio’s Mickey Mouse and Donald Duck were at first my favorites but my appreciation to cartoons characters soon spread to those from Warner Brothers.  The antics of Porky Pig were always amusing and I was especially fond of the clowning around of Bugs Bunny.

Since I grew up in the city of Burbank where these two studios were located I felt especially proud of their work.  In time my sensibilities grew to appreciate the work of other animators especially the work of Walter Lantz.  The Lantz studios were best known for Woody Woodpecker who I always enjoyed watching but in time I found that the characters Andy Panda and Chilly Willy, who seemed less polished, were therefore more endearing to me.

It was to my surprise that when The Littlest Dragon finally appeared on my drawing board he had a look that stylistic was similar to the characters from the Lantz studio.  He had that cute innocent look of Andy Panda, much like a ten-year-old boy with lots of energy mixed with a naïve curiosity.  The interesting thing was that I hadn’t thought of Lantz’s work or any cartoon characters until I saw the likeness in my drawing.

The Littlest Dragon enters the story at the end of chapter one and the fact that he is so small is one of the most important aspects of this work.  It seems so often in our world that size matters.  The big and important people get all the attention but that’s not the way it should be.

I wanted to create a creature that looked vulnerable and maybe even helpless to serve as a model of who we can be, of what we can over come regardless of how small or insignificant we are perceived.  I wanted to show that we don’t need special powers to overcome difficulties that being normal is okay and if we focus on the  positive and have persistence we can succeed.

I have the utmost respect for other children’s book authors.  The Harry Potter series by J. K. Rowling is fantastic and what a success story.  The Percy Jackson and the Olympians series by Rick Riordan has made him the #1 New York Times bestselling author.  Kids and adults love these works but in the end I wanted to produce a children’s story that could not only entertain but could have long lasting effects.  A story where the hero of the story didn’t have to be a wizard like Harry Potter or like Percy Jackson, be the son of Poseidon an Olympic God. 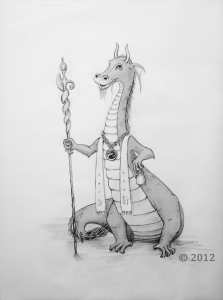 I’ve always been intrigued with drawings and paintings of historic Chinese dragons.  One of the things that I found curious was that on occasion the dragon would hold a sphere shaped object in their front claws.  Research revealed that most scholars believed this object was the dragon’s egg out of which their offspring would emerge.

I decided to begin my story within the dragon community that was high in the mountains amid the waterfalls and cascades.  The story starts on one day in spring that the dragons designated as the birthing day.  This community is very close knit; they love merriment and festivity especially the day when all the baby dragon eggs hatch.

The celebration procession is lead from cave to cave by the Grand Wizar, who is a very friendly, out going dragon who greets new dragon parents with joy and enthusiasm.  He is the most flamboyant of the dragons in this community but he also has a reverent side, in a sense he is a celebration priest.

Once the group enters each “cave the Grand Wizar would carefully chant the egg cracking mantra, giving thanks to the universal life force, the goodness in nature, and for each new addition to the dragon community.  At the end of the chant, he would take the ceremonial scepter and strike the egg, cracking it open.  Parents and neighbors alike would marvel at the birth of each new baby dragon.”