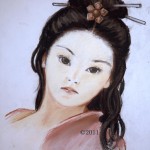 When she faces a crisis in the middle of the story because she makes her decisions through what she feels she must do, by necessity rather than by opportunity, she eliminates any other possibilities that might set her free from the dilemma.  And as great as Leizu’s character is, kind, hard working, pleasant attitude, cheerful spirit this is her one unresourceful trait.

Fortunately because The Littlest Dragon had been just average in intelligence when he grew up that he had to develop self-discipline to be able to complete his classroom lessons at school.  It was this experience that lead him to deal with the crisis in a different way.  His ability to stay focused on a problem until he found a solution combined with the wise words of the Old Dragon Sage would spin the conflict in the middle of the story in a different direction.

It is common in today’s society to refer to this as the ability to think outside of the box. Too often we don’t know how to develop this ability and when we think we’ve identified the box and are outside of it we don’t realize that we’re just inside a larger box that surrounds the old box.

One thought on “Leizu’s character flaw”